Who says a fashion show has to be about clothing? Tabbuli is once again showcasing the style of people and tattoos with their Ink’d Canvas’s theme.

Come out this Thursday, June 4th for Tabbuli’s second Ink’d Fashion Show of the summer. Judges will be there to determine the best of each category and they will need participation from the crowd!

Your host Jaisee Alexander will get the show started at 9pm and the beats by DJ Trevor D will kick off around 8pm. Make sure to take advantage of a Cointreau Margarita, only $10 through June. So go ahead, book your babysitter and call in an hour late on Friday. Tabbuli is the hottest place to be on a Thursday 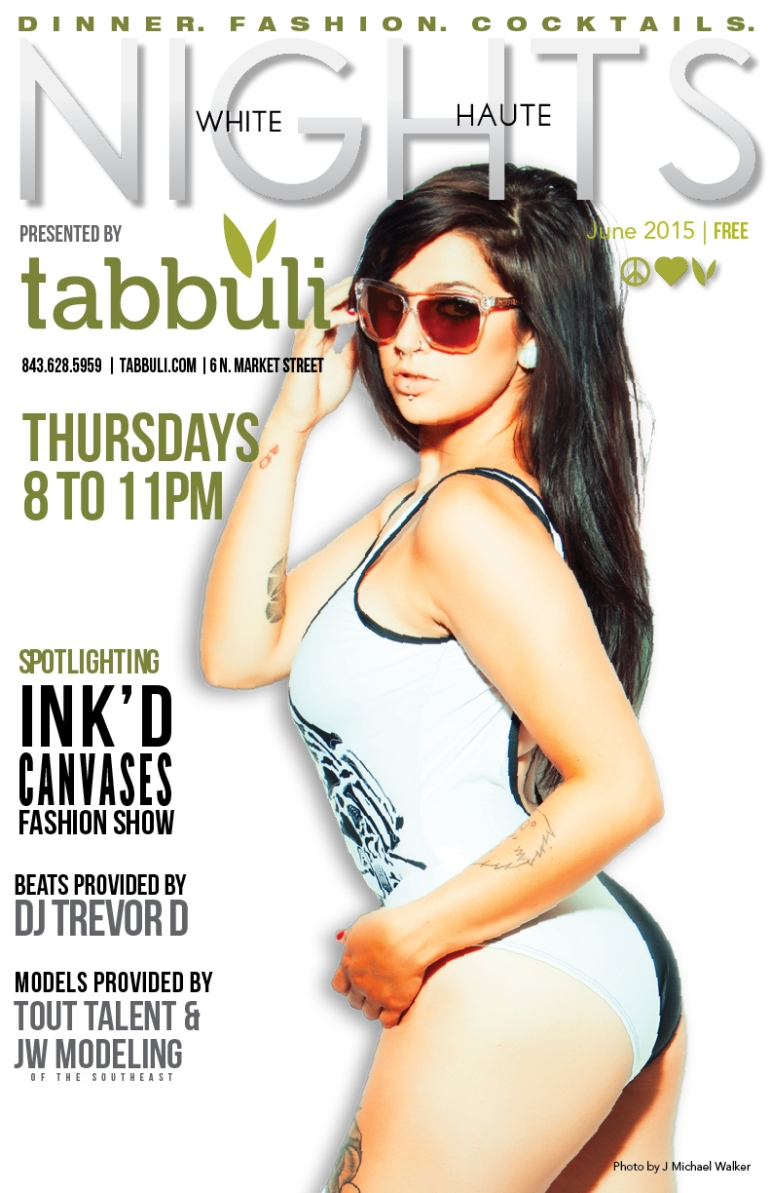 If you have not wandered downtown yet this summer, there has been a Thursday night scene that is grabbing the attention of local Charlestonians. White Haute Nights is a weekly event featuring different designers hosted by Tabbuli Grill. The event benefits local charities in the Charleston area.

This Thursday May 28, White Haute Nights will feature fascinator hats by the Reinvented Upscale Boutique of West Ashley with your host Jaisee Alexander. DJ Trevor D will be starting the party off around 8pm and the models from JWModeling and Tout Talent be will be hitting the runway by 9pm.

Get there early to choose your favorite from their infused cocktail menu while you take in the styles and atmosphere that makes Tabbuli Grill the hottest place to be on a Thursday.

Tabbuli is making the summer extra hot on Market Street with their weekly White Haute Nights event. This fashion show will spotlight Guilty Pleasures with models by JWModeling and Tout Talent and is sure to make you sweat! Ask for a Cointreau Margarita, only $10 through June, to cool you off. The music by DJ Trevor D will begin around 8pm and your host, Jaisee Alexander, will get the party started at 9pm. Don’t miss out on what everyone is talking about on Friday mornings.

Expect expert talent, passion, bottles flying and fire of numerous types as bartenders unite on the Tabbuli patio this Thursday night, May 14 for a Bartender’s Duel. White Haute Nights is spotlighting the men of Charleston Flair Bartenders to start their bar performance around 8pm to the music of DJ Trevor D. This show is being sponsored by Jack Daniels Tennessee Fire . Just imagine what our mixologists can do with a cinnamon whiskey. Come early and make sure to get some great food in you, it is sure to make for a long fun night. 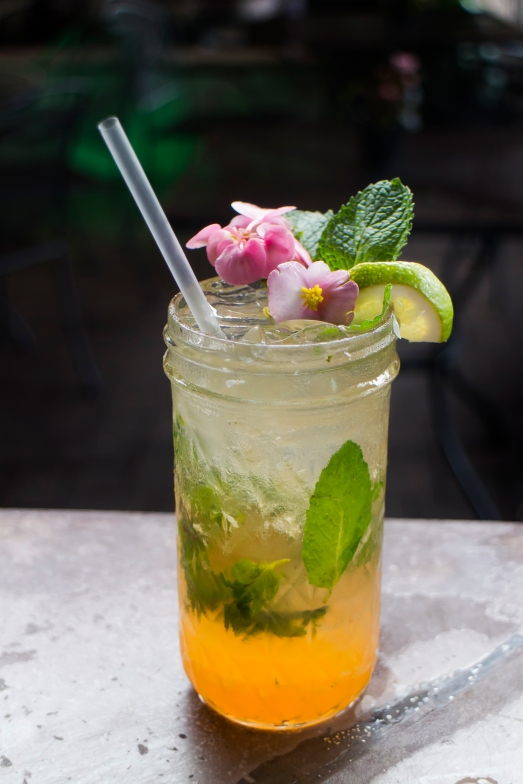 Tabbuli is fulfilling its promise of turning up the heat as summer gets in full swing. The hot spot is kicking off May with their weekly White Haute Nights fashion show featuring body art May 7. That is right, this show is purely to show off the ink on your body and Tabbuli wants to get their customers involved as the talent. Why not change your pace this Thursday night and take your place on the stage instead of in a seat? Show us your ink and give your tattoo artist some praise.

All of the usual party goers will be there to cheer you on. Your host Jaisee Alexander will get the show started at 9pm, the tracks by DJ Trevor D will kick off around 8pm, and the drink special of $2 Cathead vodkas will be flowing while supplies last. No matter if you come to enjoy the show as a customer or you contact Tabbuli letting them know you would like to be a part of the show; this Thursday will be a display of very unique and personal styles that will be hard to

Remember the simple days of field trips and boxed lunches? Tabbuli is bringing that feeling back with their new Mezze Boxed Lunch specials for a limited time until 4pm this summer.

Choose between three delicious well balanced boxed lunches for the low price of $8.99. Your first option includes a classic Kabob (gyro, chicken, or falafel) served with basmati rice, grilled vegetables, and tahini sauce. For the days you are craving a robust salad, opt for the Mezze Mix. This refreshing salad has it all. Sautéed chickpeas, cucumber, tomato, tabbuli salad, romaine, humus, tahini, Sriracha, and Charleston Hospitality Group’s own Whisk organic vinaigrette is sure to make your taste buds happy. If it is a sandwich or pita option you would rather have, Tabbuli does not disappoint with the Stuffed Pita. This grilled pita is stuffed with feta cheese, provolone, and tabbuli salad then served with a side of tzatziki sauce and Jerusalem salad.

No matter which of the three selections you pick, a Mezze Boxed Lunch from either one of the two Tabbuli locations is sure to give you a great meal in time for you to head back to the office. Take some time from your lunch hour to visit Tabbuli downtown today at 6 N Market Street or stop in the West Ashley location at 2026 Savannah Highway.

This week at Tabbuli the hookah is not the only thing that is smoking! Join in on the fun as Tabbuli features its 2nd lingerie fashion show spotlighting Badd Kitty with models by JWModeling and Tout Talent. Your host Jaisee Alexander will heat this show up starting at 9pm. The music by DJ Trevor D will begin around 8pm so make sure to come early enough to grab your seat and a few $2 Cathead vodkas while supplies last for a night that will be hard to forget!

This week’s White Haute Night’s will feature Reinvented Upscale Resale of West Ashley featuring host Jaisee Alexander. Models from Tout Talent and JW Modeling will be walking to beats from the one and only DJ Trevor D. Come and enjoy some great Mediterranean food, infused cocktails, and entertainment to kick your weekend off during the work week!

Lisa Sheldon has been named executive chef of Tabbuli, a Mediterranean eatery and hookah lounge with locations on Market Street in downtown Charleston and Savannah Highway in West Ashley. Chef Lisa brings more than two decades of experience to Tabbuli, recently relocating from the New York area.

“We are delighted to welcome Chef Lisa to the Charleston Hospitality Group family of restaurants,” said Founder and CEO Sam Mustafa. “Utilizing my family’s beloved recipes, she has turned our vision of what Tabbuli’s culinary experience should be into a reality.”

After working in the Chautauqua area of New York for 13 years, Chef Lisa and her husband Keith, also a chef, decided to trade snow for a southern lifestyle and settled in Charleston. While enjoying breakfast at Toast, one of Tabbuli’s sister restaurants, they struck up a conversation with a server who led them to Sam Mustafa. Chef Lisa’s husband now helms the kitchen at Eli’s Table, also part of the restaurant group, which offers a creative twist on Lowcountry and Continental classics.

“I’m thrilled to join an outstanding team and bring my passion to the Tabbuli kitchen downtown and in the up-and-coming neighborhood of West Ashley,” shares Chef Lisa. “By sticking to fresh, locally sourced ingredients, we’ve been able to craft a dynamic menu that is sure to please the most discerning of palates in fun, casual atmosphere.”

Although Mediterranean cuisine has never been a focus of Chef Lisa’s background, it was a Mediterranean cruise that first led her to the culinary arts. A native of Pittsburgh, she had hopes of becoming a pharmacist, nearly accepting a softball scholarship to a Division I college. However, following a family cruise, Lisa’s eyes and palate were opened in a life-changing way. She eventually enrolled at Johnson & Wales in Providence, R.I. where she was a stand out on its Division III softball team.

After graduating from Johnson & Wales with a degree in baking & pastry arts, Chef Lisa began her career at the Sheraton Minneapolis Metrodome, where she was offered an internship. She later transferred to the Athenaeum Hotel in Chautauqua, New York, where she worked for 11 years, beginning as a pastry chef before being promoted to executive chef. Chef Lisa later served as executive chef for Chautauqua Suites before heading up the kitchen at Andriaccio’s Italian Restaurant, a landmark in Chautauqua.